The use of ICT is constantly growing. But how can we curb the increasing electrical power consumption that comes with it? Postdoctoral research associate Kévin Franke believes spintronics could be the answer.

Information and Communications Technologies (ICT) enable new consumer products and driving revolutions in everything from healthcare to cars. However, the use of ICT is accompanied by ever-increasing electrical power consumption. As demand grows faster than the products’ energy efficiency, this results in a significant carbon footprint. In order to enable the continued growth of ICT new concepts and physical phenomena have to be exploited.

In spintronics, we use the magnetic moment of electrons – instead of their charge as in conventional electronics – to perform computations, store information, or sense magnetic fields. Compared to charge-based technologies, spintronics allows faster switching, higher storage densities, and non-volatility in devices such as magnetic read heads in hard disc drives and magnetic random access memory.

Can we improve the way we store data?

Hard disc drives store information by creating small magnetic domains where the magnetisation points in the same direction, either up or down. The domains are a few 100nm big and are separated by very narrow regions called magnetic domain walls. While hard disc drives have the advantage of being cheap, non-volatile, and having a long lifespan they are relatively large and fragile.

Another proposed and intensively investigated data storage technology is racetrack memory. It can be viewed as a modern and greatly improved version of the compact cassette. Instead of using a magnetic tape, tracks or so-called nanowires of magnetic material are produced. Information is stored in a sequence of magnetic domains or in the domain walls separating them. The flow of an electric current moves the magnetic domain walls, shifting the train of information. This has the advantage of not requiring moving parts which means that it is not fragile. It is also non-volatile and allows high-density data storage.

Unfortunately racetrack memory has one disadvantage that it shares with the incandescent light bulb: by relying on electric currents it consumes significant amounts of power and can heat up to the point where it is destroyed.

A promising way to reduce power consumption is to control magnetism using electric fields (i.e. voltages) as it does not require the motion of electric charges. One approach is magnetoelectric multiferroics. These are materials that exhibit ferromagnetism and ferroelectricity, and these properties are coupled. Unfortunately, such materials are rare and only show weak coupling effects at well below room temperature.

Attractive alternatives are hybrid or composite material systems in which ferromagnetic and ferroelectric compounds are artificially assembled. These are for example layered structures called multiferroic heterostructures, where coupling effects are mediated at the interfaces. These structures are appealing not only because they exhibit the properties of both parent compounds, but also because interactions between magnetic and electric polarisations can lead to entirely new functionalities. For instance, coupling could, in principle, permit data to be written electrically and stored magnetically.

Are magnetic domain walls the future?

Figure 1: Image of ferromagnetic domains in a multiferroic heterostructure using a Scanning Electron Microscope with Polarisation Analysis. Arrows show the orientation of the magnetisation. Each coloured stripe is a magnetic domain. The white box indicates a width of 20 micrometers.

For the first time, we are able to control this motion, induced purely by electric fields with the direction determined by the polarity (positive or negative). Because this novel driving mechanism functions without the concurrent use of electric currents or magnetic fields it is extremely energy efficient. As such, this proof of principle study opens up the possibility of using the motion of magnetic domain walls to devise low power technologies.

Kévin Franke continues to investigate magnetic materials as a postdoctoral research associate in the Physics Department at Durham University. The research introduced was conducted in the Nanomagnetism and Spintronics group at Aalto University in collaboration with researchers at Hamburg University and the Tokyo Institute of Technology. It was partially funded by Tekniikan Edistämissäätiö. 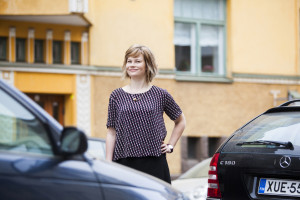 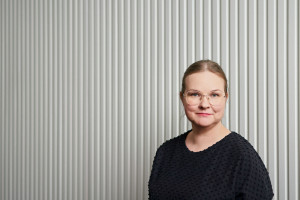